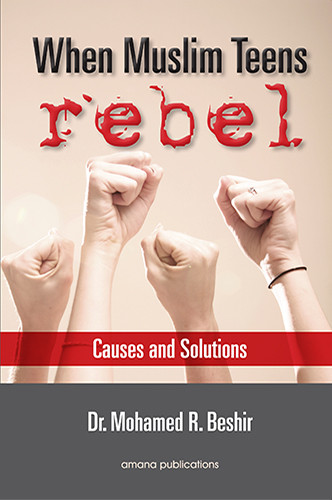 Dr. Mohamed R. Beshir
Paperback (6x9)
64 Pages
Price: $10.95
The objective of the book is to help parents save their teens from the negative impact of popular teen culture and succeed in raising them as strong, confident personalities who can contribute positively to their community and to the North American society at large. The book starts by explaining what is meant by rebellion, and discussing if it is inevitable in the life of a Muslim Teen. It then covers three basic ideas. The first idea deals with the causes of teen rebellion in general and additional factors that contribute to Muslim teen rebellion in particular. The second main idea covers the signs of this rebellion and how it manifests itself in the behavior of our teens. The third and most important part of the book deals with a comprehensive solution consisting of three components, the most significant of which is the Prophet's (pbuh) example in dealing with youth, then the role that parents can play complemented with the community's involvement. The proposed comprehensive solution cited in this book will be of great benefit to various communities in general and to Muslim teens and youth in particular.

MOHAMED RIDA BESHIR is the co-author of four best-selling books on family issues and parenting: "Meeting the Challenge of Parenting in the West, an Islamic Perspective", "Muslim Teens, Today's Worry, Tomorrow's Hope, a Practical Islamic Parenting Guide", "Blissful Marriage" and "Parenting Skills based on Qur'an and Sunnah". Several of his books have been translated to many other languages. Dr. Beshir is teaching two parenting courses with the Islamic American University, is a regular contributor to the family section of several magazines, and an adviser for the Islam online website's family section. Dr. Mohamed Rida Beshir is the recipient of the City of Ottawa Certificate of Appreciation for 2003 for his volunteer work in the area of Education as well as other City of Ottawa awards for valuable services to community children in 2006.

He is an Engineer by profession, with over 30 years of experience in Da'wa work in North America. He has held various volunteer elected positions with MSA and ISNA, MAS on both national and local levels. He led the training and development department of the Muslim American Society (MAS) for 6 years and served as a member in the department for over two decades. He is a regular speaker in ISNA, ICNA, MSA, MAC and MAS conventions. He is one of the founders of Human Concern International. He is actively developing and delivering training programs to various Muslim communities all over the world.