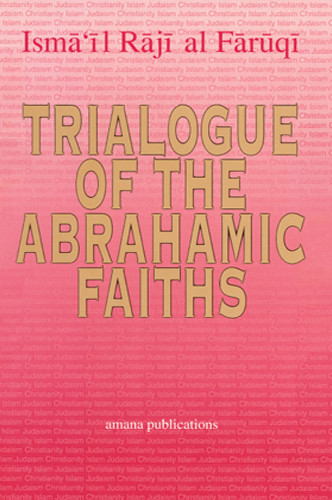 The book offers a unique forum for dialog between Muslim, Christian and Jewish scholars as they discuss issues of faith, the nation-state as a form of social organization and the faith-community as a transnational actor for justice and peace.

The late DR.  ISMA'IL RAJI AL FARUQI/) is widely recognized as an authority on Islam and comparative religion.  He was Professor of Religion at Temple University, where he founded and chaired the Islamic Studies program. Having studied or taught in the Middle East and Africa, as well as in Canada and the United States, Professor al Faruqi possessed the wide background of training and experience required for a thorough mastery of his field. His writings include numerous articles and books in both Arabic and English. Among his best known are Christian Ethics (1967), The Great Asian Religions (1969), Historical Atlas of the Religions of the World (1974), The Life of Muhammad (1976), Islam (1979), Tawhid: Its implication for Thought and Life (1982), and The Cultural Atlas of Islam (1986), which he co-authored with his wife Dr. Lamya' Ibsen al Faruqi.